Seth spills about the EVERYMAN set!

Every second-year graduate student in the Villanova Theatre MA program must complete an Orals Project, a capstone thesis within a chosen discipline.  Seth Thomas Schmitt-Hall, set assistant and actor in the Villanova Theatre MA program, chose to combine two of his passions into a single project: acting and set design.  Below, Seth shares with us a little bit about his process in conceiving of this beautiful and challenging design, and how he designs through the lens of an actor.

*NOTE: In this post, we have chosen to include only build shots.  You'll have to come see the show to be wowed by the final product.  And trust us, you'll be wowed. 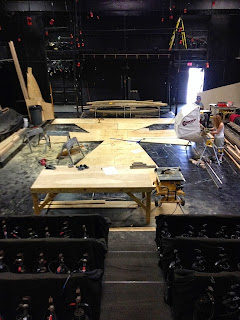 SETH:  In Everyman, I have been given the rare opportunity to act in a show for which I have designed the set.  Having worked with Father David Cregan in Salome, knowing his interest in physical theatre, I hoped to create a set that would challenge the actors physically. Approaching the design process where the script was a malleable object, I conceived of the design as a playground for the actors, giving the largest amount of choices for the director to play with while sticking as close to the dramaturgical needs of the script as possible. 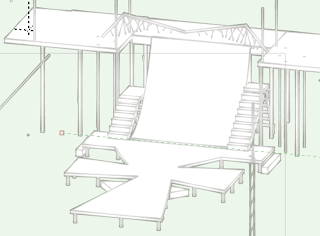 SETH: My design for this production consists of three major scenic elements; a non-symmetrical cruciform runway, two non-symmetrical staircases, and a large sloped wall that ranges from 18 inches off the stage floor to the top of the upper platform.  The sloped wall is an obstacle that Everyman cannot climb. It acts as a wall and a road, an obstacle and an entrance. 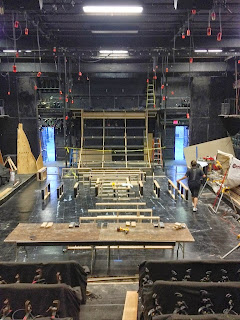 SETH: As a son of two Episcopalian priests, my life has been filled with vacations to explore old Gothic and Nordic cathedrals. So when considering a way to have structure based in Medieval England, my mind was drawn to the remnants of an old cathedral floor.  The floor of a cathedral is a common place for a gravestone.  Every sunday, priests and lay people walk over bodies from the past, as if the gravestone were just another tile on the floor. This is a wonderful symbol of how Everyman walks by Death everyday without a care, and yet Death is always present. 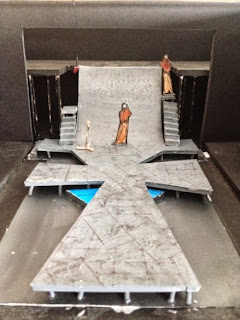 SETH: As an actor, I explore a role, challenging myself to find new ideas and make discoveries until opening night. What if I were to include in my actor exploration the mind of the scenic designer? As an actor, I will be there for the whole rehearsal process.  I’d like to investigate how I as set designer can fluidly adjust the design of the set, even after the fundamental structure has been rendered and created.  An actor has a script that cannot be changed.  The actor creates a role based upon the words of the playwright, but the character is much more than words. So too, my design has a basic structure; but how can what I learn as an actor in rehearsal - and what I learn from my fellow actors - influence changes in my design even after the foundation has been placed?

SETH: My goal in the rehearsal process is not only to have the design fit my own needs as an actor, but to see how the set (as I live with it as an actor) can help create harmony with the entire cast. I plan on talking with my cast members, seeing how they feel, how they interpret the set, what they can create based on the ground plan given to them by me as designer and the blocking given by Fr. David.  Already, discoveries have been emerging.  One of my fellow cast members mentioned to Fr. David after a rehearsal, "It really seems like this set isn't just a playground for us.  It is our obstacle, as well."  Play on, friends!

Posted by Villanova Theatre at 1:43 PM

Spectrum Environmental Services, Inc. is a multifaceted family of companies
offering environmental consulting, industrial services and environmental products.
With headquarters in Alabaster, Alabama, near Birmingham, the Spectrum group of companies
brings a high level of commitment toward quality and professionalism to every aspect of your project.
Hydroblasting services, vacuum truck services, industrial spill products, and more -
as the name “Spectrum” suggests, we offer a complete and comprehensive array of products and services
including industrial, waste management, consulting, and remediation services. With Spectrum, your
company can access one full-service, integrated source
that is designed to help manage your company’s relationship with the environment.
Hydroblasting services