A GIANT congratulations to Victoria Rose Bonito, who was awarded the Brian Morgan Award this past Saturday.  The Brian Morgan Award, which honors a second year actor who displays talent, work ethic, and a playful and generous spirit, could not have gone to a more deserving candidate!

On their path to graduation, all Villanova Theatre second-year students complete an Orals project, basically a Master's thesis, in a chosen area that they have studied over the past two years. Options range from academic to artistic and have taken on many forms over the years. Victoria, currently playing Maggie in Villanova Theatre's Red Herring, is using her role in the fast-paced, period comedy to apply to her Orals project in Acting. Victoria speaks about the process, obstacles and rewards involved in readying Maggie for the stage every evening.
VICTORIA: 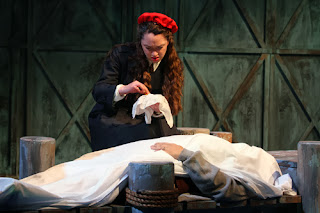 From day one of the rehearsal process, Red Herring has been something special.  After reading the play over the summer, Maggie jumped out at me as a role I would adore exploring, and I thought it would be an interesting challenge to take on as my Acting Oral as well.  Aside from the very clear dialect challenge--Boston sits in a much more "difficult" place for me vocally than, say, the American South or the British Isles--Maggie is not just what she seems on the surface.  She has muscle and is a more aggressive role than I have played in the recent past; being a female cop in a man's world, she must be tough to hold her position toward the top of her field.  This attitude strangely helped me with the dialect, and vice versa, as the vocal quality and sound is a bit more forceful and no nonsense.  I love her for her edge...and simultaneously, her heart.  At the very first rehearsal, Michael said that in writing this play he wanted to "create as much craziness and bury as much truth as possible" in the piece.  This give and take of energy has been (and still continues to be!) the most exhilarating part of the process for me. 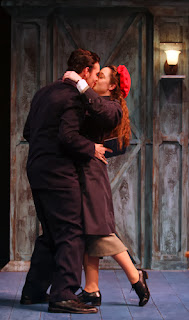 The style and rhythm of this play is also exciting and a tad intimidating.  But it all came together with that first audience.  The fast-paced, cinematic style that Michael has crafted his world in leaves little time to think--only time to do.  For an actor, this is both core-shattering and incredibly freeing.  While I still study my scene change list EVERY night, I also find myself in GO mode throughout each run; when I am conscious of and tuned in to what Maggie is doing, I find that I am more specific, nuanced, and on point as an actor.  There is little time to consider feeling--you just do it!  The noir vibe also came to life once the audience embraced it (which they do quite early).  At first, the takes out to the audience and the epic clinchers ("I think it's time to sharpen my harpoon") felt a bit unnatural.  Not out of place in the world of the play, just a tad zanier than one would expect of a largely "realistic" character.  The height of storytelling that these moments allow, however, is astounding.  Finding this rhythm was essential and now continues to be endless fun. 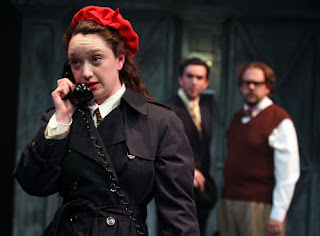 Most of all, I love how Maggie anchors the play in a very real way.  It takes a good bit of sanity to enter into the final scene and ask "will you marry me" while there are guns drawn, people hanging off docks, and general mayhem ensuing.  This is the brilliance of Michael's writing, the beauty of Harriet's directing, and the fun for me--this story is real in so many ways.  Love is not the most straight-forward thing to begin with...so why make a "normal" story about it?  I am having a blast both in the run of this production and in investigating it more deeply for my Acting Oral.  Thus far it has proven satisfying artistically, emotionally, and intellectually, and has led to some fabulous conversations at home in my own marriage.  Here's further proof that art imitates life and life often imitates art.  This sure will be a difficult one to close!
Posted by Villanova Theatre at 12:20 PM