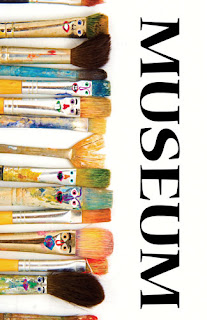 Hi, friends!
Emily again, this time writing about Villanova Theatre's upcoming production of MUSEUM! MUSEUM, which is written by one of America's most inventive female playwrights, Tina Howe, is directed by Joanna Rotté, one of Villanova Theatre's most experienced faculty members. Joanna was taught by legendary acting teacher, Stella Adler, so it's pretty cool to be learning from and directed by someone with so much knowledge!
What's really crazy about MUSEUM is that it features 42 (yes, 42!) actors that range in age all the way from 18-72 years old. Our first read through was such a joy ride--it was so neat to come together and actually hear the silly antics and moving moments all the characters go through. As we read, and at subsequent rehearsals since, Joanna was sure to remind us that our characters are real people experiencing art. "Don't play the comedy; it's about the art," she keeps telling us. That piece of direction is really helpful for me--when the actors are staying true to reality and actually understand their characters, the comedy definitely comes out! Without forcing it, each and every actor is able to bring some kind of comic intent to the play. But behind the comedy lie some really poignant ideas.
Another fun fact (maybe the MOST fun fact!) about our production is that the art in the show's exhibit is being created by actual artists. Pretty cool, huh? Joanna and the production team found real artists who fit the playwright's description of the artists in MUSEUM perfectly. There's Villanova Theatre Prop Master (and painter/sculptor) Ward Van Haute, who is "playing" the Steve Williams character. Ward (and Williams) created hanging soft sculptures that intrigue and delight several of the characters on stage. Lawrence Anastasi is Zachary Moe (well, and his father, "Mr. Moe"... you'll see what I mean when you see the show)--he has created some abstract white paintings that are visited by some very special people. Finally, there's Heather McLaughlin, who is Agnes Vaag. Heather is in the process of creating seven found-object sculptures for the exhibit. My character, Tink, is especially interested in Agnes' artwork--something pretty neat happens when I'm checking out her sculptures, so you'll just have to see the show to find out exactly what it is! All of the artists will appear in the show each night--so it'll be especially fun for the audience to look for them every night! 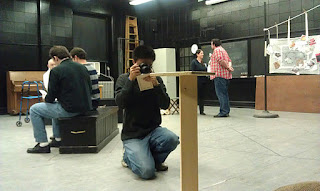 The best part about this show is the sense of community we're fostering among the cast, crew, production team and the artists. With over 50 people involved, that can be pretty hard to do! But I truly feel that everyone's understanding of the process and respect for the art is helping to foster a great sense of togetherness. I can't wait to see what this week of rehearsal brings! I'll be sure to keep you updated with awesome revelations and the fun and moving moments we encounter.
Talk to you soon!
Photo by Jen Jaynes
Emily
P.S. Want tickets to the MUSEUM? Go online or call 610-519-7474. They're going fast, so get to it! :)
Posted by Villanova Theatre at 12:19 PM