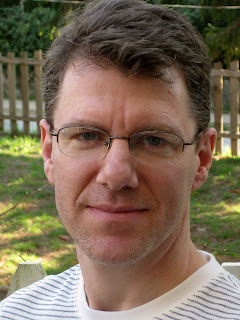 Second-year MA student Elizabeth Marafino, in preparation for her role as Dramaturg for the upcoming production of Red Herring, sat down with playwright Michael Hollinger (who is also a professor of Theatre and the Associate Artistic Director for Villanova Theatre) to get his thoughts on corpses, noir, and marriage.


What was the initial inspiration for Red Herring?

I was teaching a playwriting class in the mid-90s and assigned my students an in-class writing exercise to write a scene based around a significant set piece. I wrote one, too, which turned out to be a hard-boiled detective interviewing a tough-cookie landlady over a bathtub where the bare legs of her dead tenant (presumed drowned) protruded. I liked the detective, and the landlady, and tucked them away in a file called "Cold Feet," in case this idea ever wanted to become a play. (Turns out, it did.)

How did the play develop into its final form?

I wrote the play in earnest over about two years, and developed it during that time through readings and short workshops at Arden Theatre Company and Berkshire Theatre Festival. At one point, it stretched to 30 scenes -- it found its final form at 25 — so I generated a lot of material that I eventually threw out (including a torch song for Mrs. Kravitz called "There's Somethin' Fishy Goin' On," and a monologue for the Corpse). Because the structure is so complex, I mapped out dozens of different scene arrangements, like trying to solve a really difficult Sudoku puzzle. After our first audience at the Arden, I cut two entire scenes, and had to rewrite others in order to incorporate key information that was revealed in the cut scenes. Many trees died before I stopped revising this play.

Why were you particularly drawn to noir at the time of writing the play?

I had dramaturged a noir musical called Gunmetal Blues at the Wilma Theater a few years before, and became very taken with the conventions of this form, particularly the way protagonists get beat up (literally and figuratively) as they descend into the underworld. Noir is fun as a style, and in fact can seem rather overexposed at times, but I was more interested in using it as a means to say something true about love than to spoof its devices.

How did marriage become the defining center of the play?

For nearly all of my plays, I start out thinking they're about one thing, and at some point I become disgusted with the whole idea: "Who cares about these tough-talking detectives and this silly spy story anyway? Why do I care about it? What's the story beneath the story?" When I looked more closely at what I'd written, I realized themes of love and coupledom -- and a reluctance to marry -- were at the heart of the play (remember "Cold Feet"?). I'd been married myself for eight or nine years at that point, realized I had things I wanted to explore about the institution, and that crime, nuclear espionage, and 1950s America might provide useful metaphors for looking at marriage.

What was the impetus for incorporating Joseph McCarthy into a noir play about marriage?

The play throws up icons of the early 50s — Ike, Dick Nixon, Adlai Stevenson, Lucille Ball, Milton Berle, J. Edgar Hoover, the Rosenbergs, etc. -- both as cultural markers and as embodiments of certain qualities. McCarthy was a towering (and very threatening) figure for a few years during this time, and I was interested in exploring how the Communist fears he worked so hard to cultivate parallel the jealousy and paranoia we can experience when love becomes possessive.

Why was it important for you to write Red Herring?

My previous three plays had all been written for single settings, with lots of unities and almost no doubling. On a purely formal level, I wanted my next play to feel "extravagant" — lots of scenes, characters, costumes, plot twists and turns. But in terms of content, I really wanted to use this very fabricated, high-style world to say as many true things as possible about love and marriage, subjects I hold dear to my heart.  My parents got married in a police station, both of them refugees of previous marriages that ended disastrously. Theirs was not a "picture-book" marriage, but it worked, and lasted (unlike their first marriages, which nevertheless produced great pictures). In the same way that Christians celebrate Jesus's birth in a stable of all places, I've always held dear the fact that my parents joined their lives together in such a humble setting, without pomp or illusions, acknowledging their own brokenness and each other's. This, for me, embodies the spiritual nature of marriage, which, in our materialist culture, we can easily lose sight of amid the pomp and frou-frou.

Do you have any thoughts in regards to collaborating  as a playwright with Professor Harriet Power and with Villanova?

It's very meaningful for me to be able to collaborate again with my friend and colleague on this production, after working together on my play Incorruptible at Villanova Theatre in 2005, and on professional projects at PlayPenn and New Dramatists thereafter. Red Herring is a very intricate play on all sorts of levels, requiring painstaking preparation to assemble, and no director I know prepares as painstakingly as Harriet, so I know this production is in very good hands.