Thank you to everyone who came to see Mother Courage and Her Children. We were terribly proud of the production and hope that you enjoyed your time in the theatre.

Recently, local critic Jim Rutter penned an interesting piece for the Broad Street Review. In it, he points out how few theatres in Philadelphia have strong track records for producing plays with meaty, interesting, lead roles for women. He praises our Joanna Rotte and Kristen O'Rourke, both in Mother Courage, and wonders why two recent grads, Marcie Bramucci and Jessica Dal Canton, haven't appeared in Philly yet. (The answer to the Marcie question is easy -- she moved to New York!)

Read the article here, then let us know what you think about the topic. Actresses: Are you starving for good, hefty roles?

m.d.
Posted by Villanova Theatre at 1:48 PM No comments:

Anyone see Disney's Bedknobs and Broomsticks when you were little? I came across this video while I was looking for YouTube clips that might be relevant to MoCo. I watched it and laughed, and thought, "Wow. Really awesome, but not relevant."

But you know, in a funny way, see, it is relevant. It's one of the many, many ways that war has been treated in theatre/film. We've had some other great examples around Philly recently. Just last month, Temple's grad program produced a powerful production of In Conflict, a play about the war in Iraq. InterAct is currently doing Last of the Boys, which wrestles with the aftermath of Vietnam. Mother Courage was Brecht's way of using the Thirty Years War to comment on what was going on around him during WWII. Each a very different approach to a similar topic, and each with its own unique impact.

Bedknobs and Broomsticks was made in 1971, but set during WWII. As a Disney film, it had much more to do with escapism (ex., children who fly out of a warzone on a magical bed, and who later "magic" household items into battling some easily-confused Germans) than with epic theatre. (Okay, let's be honest: It has nothing to do with epic theatre.) All the same, it makes you think: How did I process the concept of war when I was little? How do I process it now? And how does the art I participate in help me do that? Come to think of it, can it hinder the process? Wait ... what is the process?

And finally, where'd Angela Lansbury get those moves, and will someone please, please incorporate them into a Solo Performance assignment?

m.d.
Posted by Villanova Theatre at 5:15 PM No comments:

I'm fascinated with the way things continue to come together. In the span of a single weekend, the floor was transformed from a blank slate into a gorgeous map of Europe during the Thirty Years War (the setting for Mother Courage). The costumes and props that we used for our recent press photo shoot aren't quite complete, but they sure are looking beautiful. -m.d.

Posted by Villanova Theatre at 4:29 PM No comments:

The Many Faces of Mother Courage

Posted by Villanova Theatre at 8:31 PM No comments:

Down 'n' Dirty with Bertie

Hi everybody!
My name is Carrie Chapter, and I'm the dramaturg for Villanova Theatre's production of Mother Courage. What the heck is a dramaturg, you say? Well, a dramaturg is someone who spends a lot of time on the internet and in the library....but is also a theatre nerd! So, a dramaturg (or the family-friendly synonym "literary manager") works on all the research required for a production, and then some. The job description is a bit fuzzy, but all you really need to know about me is that I'm here on the blog to answer any questions you might have about the play, and also to give you the inside scoop on all things Brecht. Because there is soooo much information needed for a play like this, I'll be posting a lot of random stuff on the blog. It would range from fun facts on Brecht the man to cool-looking past productions to some links to YouTube videos on war footage and political cartoons.
Let's start with this Bertolt Brecht guy. Anything you've heard about him (if you have heard of him) is pretty pretentious, right? He is hailed as a god among mere mortals in theatre history, simply because he did something that most contemporary artists to today: in order to draw attention to his art, he broke the rules.
But, in my opinion, his personal life is just as freaky and fascinating as his work.
1.) Brecht had more lovers than he had fingers. He was married twice, but was always unfaithful. There are all kinds of rumors about possible illegitimate baby Brechts floating around, as well as some weird attitudes Brecht himself had about women and pregnancy. Apparently, he applauded his lovers if they became pregnant,because it meant his progeny would "flourish" (he was extremely self-centered). Of course, it's one thing to want a child, but raising it....Brecht liked the idea but struggled with fatherhood. He had one known illegitimate son named Frank, who spent his life bouncing around foster homes and who eventually died fighting in World War II. But, there are several reports of his mistresses having miscarriages and even abortions (his first wife, Marianne Zoff, aborted Brecht's 2nd child; Brecht was having an affair at the time with his future SECOND wife, Helene Weigel *the most famous and original Mother Courage).
2.) Brecht was a very jealous man. Although his women were well aware of his other lovers, they were forbidden by Brecht to see other men. One of his lovers left Brecht to marry another man, and Brecht followed her, barricaded her in her room, and refused to leave her bed until she came back with him. He stayed for three days, and he won back his lady. He did these things not for true love (while he was doing all this, he had 2 other lovers waiting for his return), but because he felt as if he was losing something that BELONGED to him. Crazy, huh?

3.) Helene Weigel, the original Mother Courage and Brecht's "rock", was an unbelievably strong woman...and Brecht knew that. She knew all about his affairs, but instead of leaving him, she would invite the mistresses into their homes in order to create some twisted family unit - all to make Brecht happy. Despite it all, Brecht refused to divorce Weigel; he needed her too much. She eventually took over control of Brecht's Berliner Ensemble theatre company when he became too sick or too busy with other projects. In dealing with a man as difficult as Brecht, she had to become Mother Courage, in a sense.
4.) Brecht has said (supposedly) that his most beloved companion was not a woman, but rather his dog. A German shepherd named Rolf. :)
* If you have time or Netflix, check out this 2000 German film, which talks about the end of Brecht's life in a semi-factual way. The actors playing his mistresses look EXACTLY like the real women, it's scary. It's called "The Farewell." Here is a link with more information about the movie:
http://www.prairienet.org/ejahiel/abschied.htm
Posted by Villanova Theatre at 7:24 PM No comments:

Who is this Brecht guy, anyway? 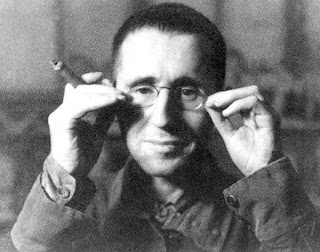 Though he married Helene Weigel, the leading lady in many of his plays, he didn't, shall we say, limit himself in the world of romance.

Read a little more about Brecht here. Our dramaturg for the production, grad student and research scholar Carrie Chapter, will post some of her copious research here soon. Some of the stories she's come up with are pretty great.
Posted by Villanova Theatre at 9:29 PM No comments:

Turning nothing into everything.

Our set, props, and costumes assistants have amazing stores of creativity. Don't believe me? Check out our photos from today's set and costume progress. When our audience walks through the doors, they'll see a stunning finished product. Before that can happen, though, there are hours upon hours of work to be done.

Even when you know how many magicians it takes, it's still a pretty cool trick.
m.d.

Posted by Villanova Theatre at 5:08 PM No comments:

Mother Courage is Coming to Town 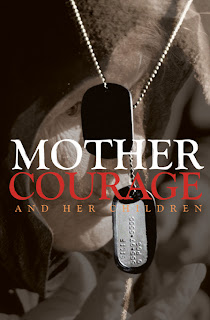 Mother Courage and Her Children will be on stage for two separate weeks, November 13-18 and November 27-December 2. (There's a break in there for Thanksgiving.)

The official blurb for Mother Courage (commonly nicknamed around here as "MoCo") goes like this:

"In Brecht's epic masterpiece, a war rages on while the worldly-wise Mother Courage seeks her fortune selling goods to the soldiers. But the war exacts a price - as war always does - and Mother Courage's soaring profits are tempered by searing loss. First performed in 1941, Mother Courage remains deeply moving and powerfully relevant. "

m.d.
Posted by Villanova Theatre at 5:49 PM No comments:

A New Blog, A New Forum!

We'll be posting information about upcoming shows, like rehearsal photos, set and costume designs, and background information that will let our audiences get a glimpse of all the millions of things that happen backstage.

Our first set of posts will be about our upcoming production of Mother Courage and Her Children, Bertolt Brecht's powerful drama that details the intersection of conflict and commerce - and the resulting effect on the lives of individuals.

Please check in with us often, and participate in the conversation!