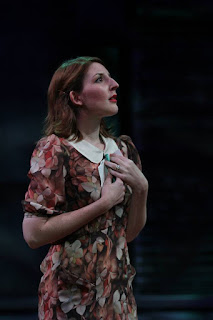 On their path to graduation, all Villanova Theatre second-year students complete a Thesis project in a chosen area that they have studied over the past two years. Options range from academic to artistic and have taken on many forms over the years. Rebecca, is currently playing the title role of Eurydice in Villanova Theatre's current production of Sarah Ruhl's Eurydice. Below, Rebecca shares with us her own Dear Eurydice letter:

Remember when we first met? I was afraid to approach you in the beginning. You have lived for centuries. Your tale is ancient, yet your words are new and alive. You now tell your story with your own strong voice. The honor of giving sound to that voice is overwhelming and expectations are high, especially the expectations I place on myself. Questions such as,” Will I find your voice speaking honestly and bravely through my own?,”  “Can I capture you in a recognizable and original way?,” and “Do I have the emotional strength to carry this titular role?,” pulsed through my mind.

Mixed with this trepidation was also bursting excitement. A famed character from Greek mythology now adapted to speak with such bravery and generosity, you are an iconic role to play. The range of emotions you express are a welcome challenge for anyone honing their craft. While the weight of the play is heavy, your lightness of spirit is joyful. How often does one get to tackle such a paradox!?

This lightness and simplicity of your speech at first belies the depth of your intellect and capacity to feel. You say you do not need rhythm, but the rhythm of your heart is undeniable. The beats of your emotions and the rhythmic pace of your journey from life to death, love and loss; are as lyrical as Orpheus’ music. The poetry of your words and bravery in your choices give me the opportunity to travel your road as I speak words which not mine, but made mine. Ours. As we dance together.

And we have danced! Our friendship blossomed to complete happiness with a power to feel and play that I have never felt before in rehearsals.  With the loving support of a creative team and surrounded by an encouraging and talented cast, my fear quickly melted as I found freedom to make mistakes and expand my physical and emotional abilities.

Eurydice, do you recall that secret I told you? Crying was embarrassing for me. There was something in the release of tears that always felt weak and shameful. I expect most people understand that feeling. But you have taught me no emotion is weak. Your expression of love is so free and your thoughts so open that to share them is a delight and not a shame. 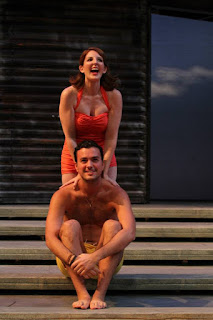 I have no embarrassment now in loving, laughing, and crying. It means I am alive.

Your story reminds me that time is short. I hope it reminds our audiences, too. It seems like yesterday that we said “hello.” Now it is almost time to say “goodbye.” We should be good at that by now. We say difficult “goodbyes” so many times in this play. Leave-taking should be our forte. I confess I am still not a master of it. I struggle now to find the right words to express myself. You have connected my heart to my voice, for which I am eternally grateful.

I want the words to be perfect and saying everything. I even thought saying it in a letter would be easier.

All I can say is thank you for letting me share breath with you.

Sincerely (and always) yours,
Rebecca
Posted by Villanova Theatre at 1:50 PM No comments:

Johnson: Tell me about Eurydice and what it's about in your own words.

Johnson: Tell me about directing. What are the challenges? What's fun about it?

Ijames: I think the biggest challenge is finding space for my ideas/vision in relationship to the collaborators around me so that the final piece of art is something we all created together. That's a beautiful thing to balance but is not without difficulty. My favorite part is tech. When it all comes together and the magic happens. 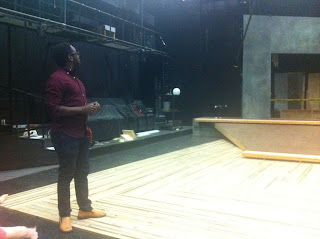 Ijames: Sarah Ruhl is one of the greatest writers of her generation. I love her use of magic and whimsy but her plays are very sturdy. I think of Sarah Ruhl's plays in much the same way I consider a gothic church. There is so much happening, and it hard to take it all in, but they are always reaching for the sublime. 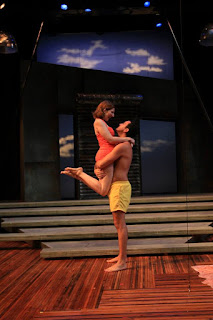 Johnson: Tell me a little about your cast. How are the kids doing with the material?

Ijames: The cast is great. Super smart, fearless, daring and honest. I adore them.

Johnson: Tell me why people should attend a Villanova production and this one in particular.

Ijames: It's going to be a fresh take on a play that has been done quite a bit. We have worked really hard to make the world feel very immediate even when in the moments that live in nostalgia. Also, the design and acting is pretty terrific. You wanna see it!

Villanova Theatre’s production of Eurydice opens tonight and runs through October 4th. Get your tickets at www.villanovatheatre.org or call us at 610-519-7474.
Posted by Villanova Theatre at 3:47 PM No comments:

The Reclaiming of Eurydice 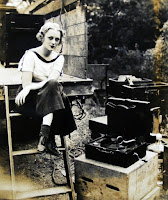 Sarah Ruhl finds inspiration for her play Eurydice in the Greek myth of Orpheus and Eurydice, a tale which is quintessentially tragic.  The tragedy of the classical lovers lies in the idea of one fated and fatal moment, one split second decision that alters two lifetimes.  When Orpheus descends into the Underworld to rescue his wife Eurydice from untimely death, he receives strict instructions that he must walk out of the realm of the dead without looking back at his beloved.  Orpheus must resist the temptation to reassure himself that Eurydice is following him, and he must practice complete and total faith.  When he does look back, it is an all too human response. Whether Orpheus’ failure to comply with his directives is the result of a knee jerk, unconscious response or indicative of some larger fissure of trust between himself and Eurydice, the fact is this single action bears eternal and weighty consequences.  Eurydice must die a second death, and Orpheus must return alone to the earthly realm and live out the rest of his days without his one great love.

Ultimately, Sarah Ruhl reclaims Eurydice from her traditional role as a footnote and mere function in the tragedy belonging largely to her husband Orpheus. Ruhl rescues Eurydice from tragedy, victimhood, disempowerment, and oblivion.  The woman who triumphantly emerges is the amazing woman you will see on the Vasey stage: a woman who deals with incredibly difficult circumstances, yet never wavers in her determination to control of her own life.  Suddenly, the tale of Orpheus and Eurydice is no longer a tragedy, but a brave and poignant tale of love, loss, and ultimately fragile and beautiful hope. 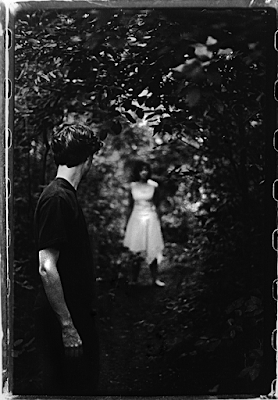 Sarah Ruhl adapts the myth in a variety of ways, but she particularly focuses on re-imagining and reframing the idea of the “looking back”.  In Ruhl’s Eurydice, the act of looking back is not a mistake, but an act of agency.  Eurydice, depicted by Ruhl, as a modern woman learning how to wield her own power, actually calls out to Orpheus as she follows him out of the Underworld.  Eurydice is the catalyst of this moment, and suddenly Orpheus’ decision to look back represents Eurydice’s choice to control her own destiny.  (I will let the production speak for the reasons Eurydice chooses to call out to her husband, for the actors can illuminate the nuances of this far better than I can.) Sarah Ruhl subverts the idea of looking back so that it becomes the moment that our heroine, Eurydice, embodies her full potential, rather than the moment in which she is simply a hapless victim to her husband’s tragic faux pas.

Sarah Ruhl continues to rebel against the traditional tale of Orpheus and Eurydice by reclaiming the idea of what it means to forget.  Traditionally, when a person died and descended into the Underworld, a swim in the River Lethe was part of the elaborate ritual of passage. The Lethe was the river of forgetfulness, and the Underworld was a place where all souls shared in their inability to remember anything or anyone from the earthly realm.  Therefore, not only was Orpheus forced to return to live out his mortal life without his love, but he was also the only half of the couple who was even aware of this great loss. Eurydice, having died a second death, was completely oblivious that she even had a husband or that he was torn from her life.  Once again, the classic version of the myth positions Orpheus at the center of the story as both the catalyst of dramatic misfortune and the main recipient of its consequence. 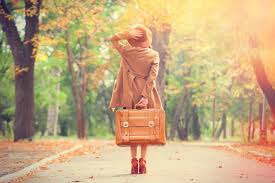 Just as Ruhl bestows Eurydice with the agency to cause Orpheus to look back and relinquish her once again to the Underworld, Ruhl allows Eurydice to choose to exist in a state of forgetfulness. Ruhl’s interpretation of forgetting is not one of punishment, consequence, or misfortune, but it is rather a symbol of acceptance and a coming to terms with circumstances.  Eurydice, as reimagined by Sarah Ruhl, chooses to forget so that she can finally be at peace. (Once again, I will not spoil the delicious reasons of Eurydice’s choice- come and see our production!)  Ruhl openly acknowledges that she wrote Eurydice in an attempt to come to terms with her profound grief over the death of her father; her reframing of forgetting as a relief rather than a burden perhaps indicates her personal feelings about moving past mourning into acceptance.