Hooray! StageMagazineOnline.com sent reviewer Arnie Finkel to see BABY over the weekend, and he loved the show. Some salient points:

"The cast is uniformly excellent. Janet McWilliams and Brian Kurtas as Lizzie and Danny were young and yearning, modern and motivated, appealing and absolutely wonderful. Kurtas did a super job on 'I Chose Right' and McWilliams did justice to 'The Story Goes On' (which is really the point of the show).

Sheila Egan as Arlene and Andy Joos as Alan were adult and adept, confused and concerned, resigned and really terrific. Joos did very well with 'Easier To Love' and Egan did a superior job on the difficult number 'Patterns'.

Rachel Ann Stephan and Charles Illingworth IV as Pam and Nick were athletic and attractive, resolute and romantic, personable and perfectly cast. They wrung every possible nuance out of 'Romance I II and III.'

The 10 person ensemble was incredible. Their harmonies and bit parts added immeasurably to the total effect."

Visit this link to read the whole review.
Posted by Villanova Theatre at 12:12 PM No comments: 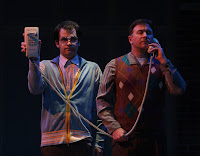 Posted by Villanova Theatre at 10:53 AM No comments:

Rachel's Insights: "What a journey!"

Wow. This process is seriously a never-ending journey for me. Just when I feel I've unlocked something in the character, something else pops up as a result. For instance, I really started to get a handle on the despair of infertility so that I could live truthfully in each moment. However, then it became apparent that I was missing the complete joy of the beginning, when Pam and Nick believe they ARE pregnant after two years of trying. This realization caused my research to take a different turn--from searching the frustration and heartbreak of infertility to unlocking the joys and ecstasy of pregnancy. Now, after the run from last night (which was extremely exciting, as well as revealing), we realized that I need to temper the level of the outward expression of emotion.

Here's the thing: I'm 23; Pam is 30. As a 23-year-old, if I feel something, I bare it completely. Pam's been wounded more; scars have been built up and she is tired. The emotion is still there and just as deep, but she's not going to put her entire body into expressing that emotion--not only because of her age, but also because of the ordeal she and Nick have to go through. When Pam opens herself up to Nick at the end, she's spent. Completely--emotionally, physically, mentally. She's done. The run-through really was an eye-opening experience. I can't wait for the chance to do it again tonight!

Another exciting thing: the costumes are rolling in!! One of the key elements for me is putting on those costumes; sometimes I never quite sink into a character's body until I put on their clothes. It might sound silly, but clothing effects the way you walk, the way you sit, the way you want others to see you, etc. They not only effect the body of a character, but are quite telling of the character's personality.
Posted by Villanova Theatre at 3:04 PM No comments: