The Impossible Here and Now: An Actors’ World of LAGAN

Second year acting scholar Chris Monaco shared his thoughts with us about our current production of Stacey Gregg’s LAGAN. In addition to playing Ian, the young writer, LAGAN is Chris’ thesis play! Learn more about Chris’ process and the kaleidoscopic world of LAGAN here: 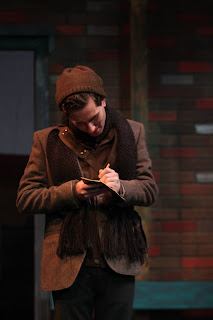 I had no idea what to expect when they announced the third show last year. “Lagan? How do you pronounce that? La GAHN? LAY-gin? Is the ‘g’ silent?” Little did I know I would eventually fall in love with the city of Belfast as written in Stacey Gregg’s play, or that I would end up doing my acting thesis on the play. The process thus far has been a huge learning curve - I’ve discovered crucial things about myself as an actor and also as a person. I’ve been keeping a journal as part of the thesis, and as Allyce (who plays my sister Aoife) pointed out, my real-life journaling blurred the line between Chris and Ian, who is also a writer and spends much of his time negotiating his external life with his inner world - trapped in his own thoughts as life goes on around him. I’ve never journaled before so it’s been really useful. Journaling has been a great way to check in with my process, how each rehearsal feels, and allows me to track my process night by night as I chip my way into the show.

Working with our director, KC has also been incredible. She’s an inspiring woman, in that she knows exactly how to coax the perfect performance out of her actors without ever exhibiting anger or panic or any of the other ugly emotions that can scare an actor in the wrong direction. She’s funny, cool, laid back, and has been absolutely fearless at the helm of this massively challenging show, one which has never been seen on American soil!
Lagan is Irish to the core. 50% of my genetic code is Irish, but I grew up 100% Italian. All I know about Northern Ireland is that Game of Thrones films there and that Irish names are the coolest names on earth (I did a film once with an Irish guy whose son was named Diarmuid. Isn’t that such a cool name?! It took me a full day to figure out how to say it, though.) Needless to say, any time I work on an Irish play – Lagan is my third foray into that beautiful country - an obstacle that stands in my way is the accent. There are so many variants on the Irish brogue, and each experience has required a complete re-evaluation of the way I pronounce vowels and consonants.

I worked on Translations at Villanova last year in which we decided to ‘create’ an Irish language because it took place in a fictional Irish town, thus giving us the liberty to create an accent which would fall easily on American ears. Lagan takes place in contemporary Belfast, thus requiring an authentic accent. Lucky for us, Villanova was able to provide us the most valuable asset possible: Andrea Ainsworth, the vocal coach from the Abbey Theatre. Andrea nearly broke me, in the best possible way. In order to learn the Northern Irish accent, I had to forget everything I thought I knew about the English language. Any of my fellow actors could tell you how much I struggled with certain words - I still get red in the face trying to pronounce the word “school.” 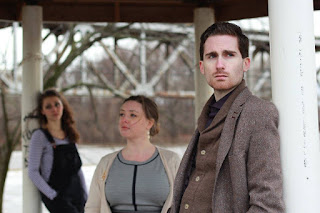 The accent was a challenge on its own, but Andrea also taught me to rethink the way I use my voice onstage - as an actor I tend to be quiet, not using much of the resonant space in my mouth. Andrea did tons of exercises with the cast to expand, accentuate, and punch different areas of the body to access different parts of our voices. The process was really incredible, even though I left more than a few rehearsals positive I would never get things right.

Near the end of Lagan, Ian asks: “Am I a cliché?” It’s an important question for the character, but also for myself as the actor playing him. There are many aspects to Ian which could inevitably lead an actor to playing him as a stereotype: he’s a writer who frequently falls in love with his own clever witticisms; he’s a tweed-wearing Anglophile; he’s quick to judge others: he compares old women to men in drag and girls who wear makeup must dabble in self-harm; and he’s gay but unable to come out to his mother. An actor playing a role like Ian could easily fall prey to judging him as harshly as some of the characters in the play do and choose to play only his cliché traits. Oddly enough, early in the process I struggled with the opposite problem: I chose to ignore Ian’s less-desirable qualities.

Typically when approaching a role, I immediately grab ahold of the similarities between myself and a character and consider how the character views the world. In the first weeks of rehearsal, I had absolutely no doubt that Ian was supremely likable and was 100% justified in saying everything that he does. When KC asked me to consider the way characters like the Taximan and Aoife talk about Ian, I realized this guy’s human. He’s not a cliché, but he’s also not some blameless superhero. He’s just a 24 year old guys, a writer, dealing with life just the same as I am. 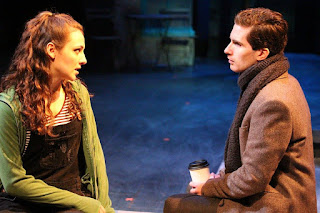 I look forward to greeting audiences into the world of Lagan. We’ve reached a point where everything feels familiar because the cast has grown to know these characters, this world, and the amazing interconnecting stories about a Belfast still learning to knit itself together. It is exciting to share this with an audience and let them in on the beauty of it all.

Lagan is the kind of show that keeps on giving - it’s smart as hell and so rich with character tics, backstory, humor and wit. Audiences who come with an open mind and a willingness to be transported into what Ian calls “the impossible here and now” will be rewarded ten times over. There’s so much love imbued in this production - the painstaking care each cast and crew member has given to this show is really palpable. It’s the kind of show I’d want to see twice - once to take it all in, and again to close my eyes and just listen to the music of the script Gregg has given us to work with.

This has been one trip abroad I never want to come back from.

LAGAN runs at Villanova Theatre through the end of this weekend (closing on February 19th). Tickets are $21-$25 with discounts available for students, alumni, faculty/staff, and senior citizens. For tickets or information please visit www.villanovatheatre.org or call the Box Office at 610-519-7474.
Posted by Villanova Theatre at 12:33 PM